Apple iPhone 13 vs iPhone 12: Differences You Should Know About

Apple iPhone 13 vs iPhone 12: Differences You Should Know About

The iPhone 13 is Apple’s newest generation of its flagship smartphone and was announced in September of 2021, replacing the iPhone 12 – which came about a year earlier. Many components like the battery, storage capacity, and other specifications were upgraded while others have stayed the same.

This is a comparison of the iPhone 13 vs iPhone 12 that you should know about.

To begin, we’ll cover the chipset which is one of the major differences between the iPhone 13 and iPhone 12. Both devices use Apple’s Bionic series of chips. But the iPhone 13 comes with Apple’s newest rendition of the component called the A15 Bionic.

What does this difference translate to? The LPDDR4X memory type has higher clock speeds, which means improved performance. As for the processor, both devices use an identical hexa-core system.

Another major difference can be found in the size of the phones’ batteries. While the iPhone 12’s battery is 2,815mAh, the iPhone 13 has been given a larger battery of 3,227mAh – adding a couple more hours of life to the phone.

Storage has also been increased with the iPhone 13. The base storage for the iPhone 12 was only 64 GB, but the iPhone 13 now comes with at least 128 GB of storage.

The iPhone 13 can be purchased with up to 512 GB of storage, double that of the iPhone 12’s maximum of 256 GB. This increase in storage for the iPhone 13 definitely comes in handy being that neither phone offers extendable storage through microSD cards.

Both phones come with the latest versions of Bluetooth 5.0 and Wi-Fi 6, as well as 5G compatibility. Dual SIM is also supported on the two phones, which can accommodate a nano-SIM card and an eSIM card or two eSIM cards.

With this, no matter the device chosen, connectivity performance shouldn’t differ.

The iPhone 13’s screen size is unchanged from its predecessor. Apple’s Super Retina XDR technology is still used on a 6.1-inch OLED display. But A difference can be seen in the refresh rate – which has been increased to 120Hz for the iPhone 13. This is up from 60Hz on the iPhone 12. The improved refresh rate makes scrolling and other animations much smoother.

The glass used for the display is Apple’s Ceramic Shield, which is produced by Corning, the same company that created Gorilla Glass. The Ceramic Shield makes the display more shatter-resistant, but it does not fare as well with scratch resistance. Additionally, despite early rumors, the iPhone 13 does not feature an under-screen fingerprint scanner. It instead relies on Face ID for password-less entry like the iPhone 12 did.

Unfortunately, both the iPhone 13 and iPhone 12 suffer from reparability concerns. But Apple has taken steps recently to remedy this.

At its release, some components like the screen could only be replaced by Apple technicians, severely limiting the abilities of independent repair shops and individuals themselves. Thankfully, parts can be purchased by individuals now and other changes are being made to allow for more flexibility in repairing. 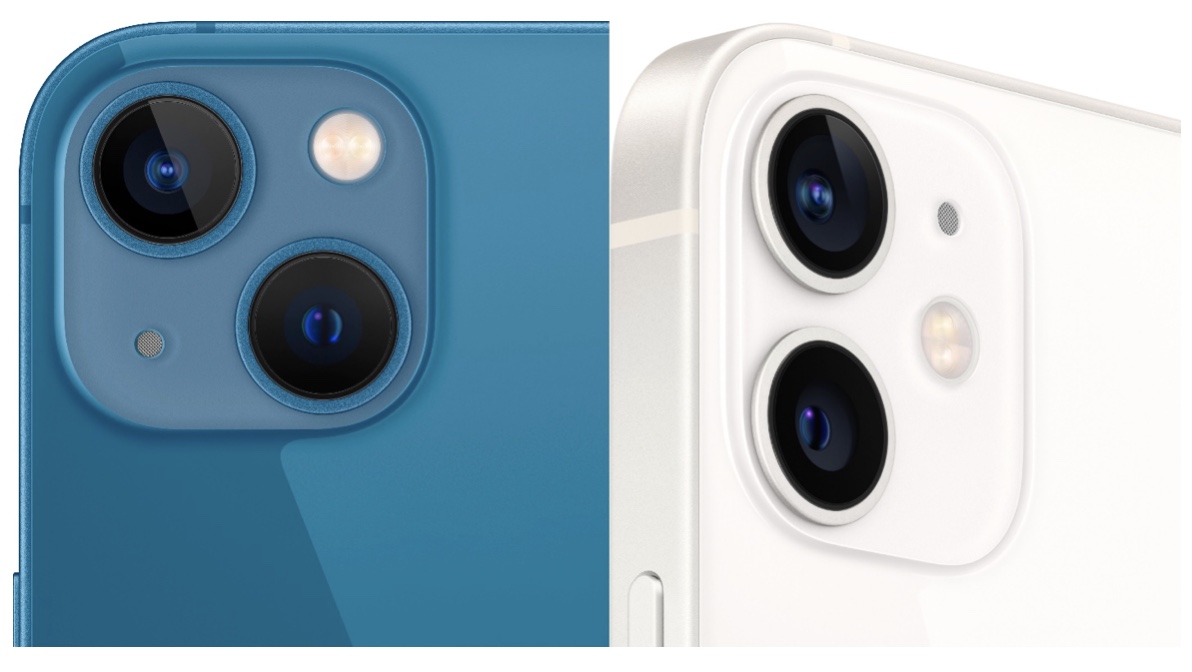 The camera systems on the two phones offer similar specifications. Both feature wide-angle and ultra-wide-angle cameras at 12-megapixel. The front-facing camera on both phones is 12-megapixel as well.

Another major difference can be seen with the layout of the camera, which is not positioned diagonally across the camera bump. This better makes use of the space offered on the bump and allows Apple to use the same larger-sensor system on the Mini version of the iPhone 13.

In terms of the video, the phones offer similar performance here as well. They both can record 4K 60fps video at their highest setting. 1080p can be recorded at up to 60fps as well.

With Dolby Vision HDR enabled, the phones can record 4K at 30fps, or 1080p up to 240fps when using the slo-mo mode. Both the iPhone 13 and iPhone 12 provide 3x digital zoom and the ability to take 8MP stills from any 4K video.

A notable video-related upgrade between the iPhone 13 and iPhone 12 is the new addition of Cinematic Mode, which supports rack focusing. This gives a smooth transition of focus between subjects and can be performed at up to 1080p 30fps.

Arguably the most important difference between the two devices, the price differs about $100 between them. Apple lists the iPhone 13 as starting off at $699, whereas the iPhone 12 has been dropped down to $599.

With most of the upgrades being related to the performance of the internal components, the worthiness of an upgrade is based on consumer preferences. The higher storage option and the Cinematic Mode feature in the iPhone 13 are the most notable upgrades compared to the previous year’s flagship.

If you have an iPhone 12 at the moment, it’s likely worth waiting until the next generation before moving to a new device as more significant changes will have taken place.

For those with an iPhone 11 or another comparable model, going with the iPhone 13 would certainly feel like the biggest upgrade of the two.