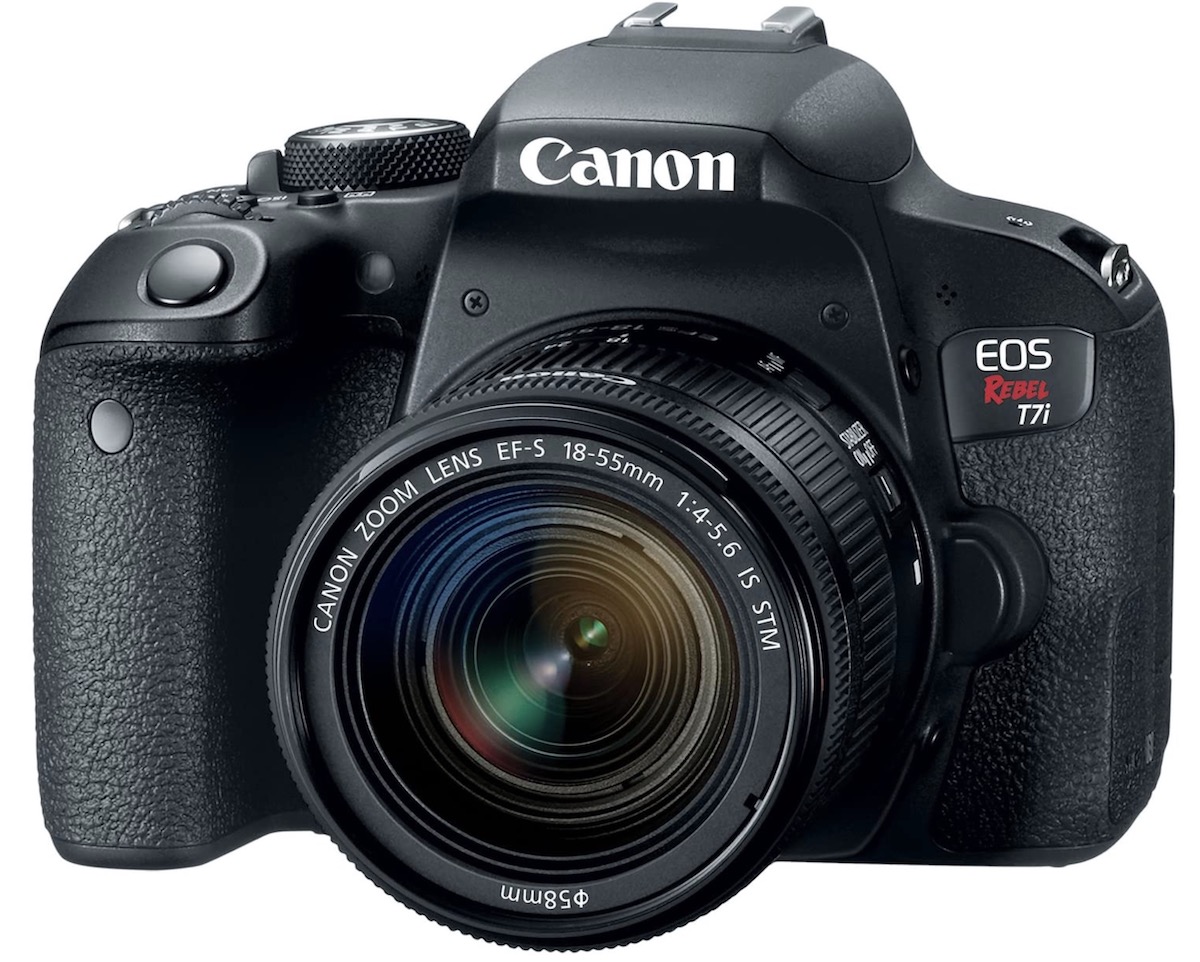 The Canon Rebel T7i is one of the best selling DSLRs at retailers right now. Released a few years ago as the successor to the Rebel T6i, the T7i boasted several notable upgrades like an updated sensor, improved autofocus, and a wider ISO range. And the T7i was the flagship model of the Rebel series until the introduction of the T8i in February of 2020. The T7i still remains a highly capable entry-level DSLR that will satisfy the needs of most casual and beginning photographers. These are the Canon EOS Rebel T7i pros and cons you should know about:

The T7i features a 24.2-megapixel CMOS sensor. The sensor is also APS-C format so it has about a 1.6x crop factor when compared to a 35mm or full-frame DSLR.

With an upgraded DIGIC 7 image processor (the T6i had the DIGIC 6), the T7i has a 100 to 25,600 ISO range — which is expandable to 51,200. This gives the camera greater ability in low light conditions even when handheld. And the new image processor also helps with noise reduction, so the image will still look sharp in high ISO set ups.

The DIGIC 7 image processor also gives the T7i the ability to fire shots at 6 fps, ensuring that you’ll capture any action at just the right moment.

Thanks to Canon’s Dual Pixel autofocus technology, the T7i has quick, accurate, and reliable autofocusing abilities no matter if you’re using the viewfinder or Live View on the front LCD. This AF method is unique among Canon cameras and is one of the biggest draws towards the T7i compared to other entry-level DSLRs. And the T7i also has 45 AF points so few areas of the imaging space are left uncovered. These two features combined mean users will find great results with the autofocus no matter the situation.

For beginners, the T7i has a handy feature assistant interface that explains what each mode is for. And it gives an easy-to-understand explanation of how aperture, shutter speed, and other manual settings affect your photos. Once the user is comfortable maneuvering the settings without the assistant, the feature can be turned off.

The T7i presents three main ways of wireless connectivity. This broadens the range of devices that pictures can be wirelessly transferred. This feature will be found most helpful by users wishing to share their photos on social media right after taking them.

As with previous Rebel models, the handgrip built into the body is deep enough to keep a firm grasp on especially with the rubber material that covers most of the body. And the external controls are also well-labeled. These three components enable a seamless and slip-free usage of the camera.

The T7i features a 3-inch touchscreen LCD that can be popped away from the body and swiveled in nearly any direction, giving the user a clear view of the screen no matter their position. And as mentioned earlier, the camera is also capable of Live View, which employs the front LCD as the viewfinder.

The camera is compatible with both of Canon’s EF-S and EF lines of lenses. And the EF-S lenses are specifically designed for the ASP-C sensor formal whereas the EF series works with both full-frame and ASP-C sensors. This compatibility with two series of lenses means that there is an expansive list of lenses that can be paired with the T7i.

According to TomsGuide.com, the T7i’s battery life is rated at about 820 shots per charge when the flash and Live View mode are not actively used. And this amount is just above average when compared to other cameras in this price range.

The Nikon D5600 — which is one of the main rivals of the T7i — achieves a slightly higher rating at 970 shots per charge. So the T7i should be able to last a couple of days of moderate shooting without needing to be recharged.

The T7i is capable of recording at 1080p at 60 fps, which will fit the needs of most casual photographers. And the camera also has Canon’s Movie Electronic IS — which gives 5-axis stabilization when used in conjunction with a compatible lens. This ensures that your videos are stable and smooth.

HDR movies are possible with the T7i as well. This feature helps keep balance the exposure even in scenes with bright highlights and dark shadows. Plus the camera has a time-lapse mode which will automatically make a short video out of a long string of photos.

Compared to the Nikon D5600, the T7i seems to have slightly less image quality. But the difference is minimal. And what the T7i lacks in image quality and battery when compared to the D5600, it makes up for in autofocus and burst rate.

The camera does not feature a built-in GPSr. Some photographers consider this feature as necessary to geotag photos. To remedy this, Canon sells the GPS Receiver GP-E2 — which is connected via the hot shoe. Otherwise, you can manually geotag photos by recording coordinates from another device (i.e. smartphone, handheld GPSr, etc.) and tagging them in programs such as Lightroom.

The T7i’s MSRP (with the 18-55mm kit lens) was priced at about $899.00. However, you can find it for a lower price at several retailers like Amazon. This means that it is a bit pricier than other DSLRs with similar specs, but it’s nonetheless a very sturdy camera with ample features.

The Canon EOS Rebel T7i has received a Pulse 2.0 score of 4.5 out of 5. The score would have been higher if the camera possessed GPS technology, as well as improved image quality and battery life. Nevertheless, the T7i remains a solid, well-rounded entry-level DSLR. With its flexibility and many features, the T7i will grow with the user as their knowledge of photography expands, continuously enabling the user to explore.

Want To Buy The Rebel T7i? Here are some options:

Disclosure: Pulse 2.0 could receive a commission for purchases made through this article.