The Always-On Retina LTPO allows you to see your most important notifications without having to tap on the display or raise your wrist.

The processor in the Apple Watch Series 6 has been upgraded as follows:

Here is a comparison of the sensor specifications of the Apple Watch 6 and Apple Watch 5:

The blood oxygen sensor expands on the health capabilities of previous Apple Watch models with a new feature that measures the oxygen saturation of the user’s blood so they can better understand overall fitness and wellness.

Oxygen saturation (SpO2) represents the percentage of oxygen being carried by red blood cells from the lungs to the rest of the body. And it indicates how well this oxygenated blood is being delivered throughout the body.

And the Blood Oxygen sensor employs four clusters of green, red, and infrared LEDs along with the four photodiodes on the back crystal of the Apple Watch Series 6 in order to measure light reflected back from blood.

The Apple Watch Series 6 uses an advanced custom algorithm built into the Blood Oxygen app, which is designed to measure blood oxygen between 70% and 100%. And on-demand measurements can be taken while the user is still and periodic background measurements occur when they are inactive, including during sleep. This data will be visible in the Health app and the user will be able to track trends over time to see how their blood oxygen level changes.

Built into the Apple Watch Series 6 is an always-on altimeter. This provides users with real-time elevation data. And it can detect small elevation changes down to a measurement of just one foot. This provides a whole new level of accuracy.

Both of the smartwatches have a storage capacity of 32GB. This gives you a decent amount of space to store your favorite music and apps. 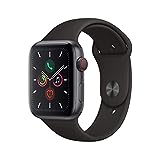 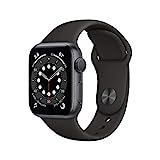 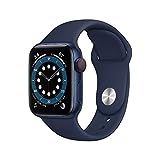