To help you decide whether to buy a Google Pixel Slate, here is a breakdown of the pros and cons:

The 12-inch screen on the Google Pixel Slate has a 3000 x 2000 Molecular display (229 pixels per inch). The large display is sharp and it provides an immersive experience.

The bezels around the edges are round. And the Pixel Slate has powerful forward firing speakers to provide solid sound. This makes watching YouTube videos and playing gaming apps a better experience.

The Pixel Slate ships with Google Play so you have access to more than one million Android apps along with your favorite music, movies, and TV shows. But since most apps are designed to work on devices at around 5 to 6 inches in size, the borders around the sides are rather large. Fortunately, the Pixel Slate allows you to change the window size so that it feels immersive with the Pixel Slate’s larger screen.

The larger display makes watching video content a great experience. I can see myself using the Pixel Slate to watch Netflix shows or sports games while chilling in bed during my downtime.

The Chrome OS supports tablet mode and a desktop mode. And the Pixel Slate automatically changes when the keyboard is attached or detached (more details about the keyboard below).

When it is in tablet mode, the home screen looks like an Android device and it has multi-window support. Chrome OS has also been updated to support touchscreen devices, making the Pixel Slate even more touch-friendly.

The battery life of the Pixel Slate is 12 hours based on mixed usage. So you should be able to use it throughout the day without having to constantly recharge it.

Plus the Pixel Slate has a 45-watt charger that provides two hours of battery life with 15 minutes of charging. And it is fully USB-C Power Delivery compliant. The Pixel Slate can be charged using your phone or a charger.

Con 1: On The Pricier Side

The highest option of the Pixel Slate tops at $1,599, which puts the 2-in-1 on the pricier side. This is priced quite a bit higher than Apple iPads. But the Pixel Slate seems to be targeting Microsoft’s Surface Pro and these prices reflect that.

In order to use the Google Pixel Slate like a proper laptop, you would have to buy a separate Pixel Slate Keyboard for $199.

The Slate Keyboard has quiet circular keys that are backlit and it has a built-in dedicated Google Assistant key. And it pairs with instantly with docking pins and magnets.

If you would rather use a laptop device powered by Chrome OS, then you may want to look at the Pixelbook instead. The Pixelbook is the first laptop that has Google Assistant built-in. And Chromebook laptops made by HP are priced for the budget-conscious as well.

Want to buy the Google Pixel Slate? You can buy one here: 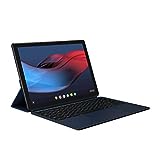