The world has just lost one of the most renowned business leaders of all time. Welch passed away on Sunday at age 84.

Welch is best known for leading General Electric through two decades of growth. To drive growth at GE, Welch had an aggressive management style and cut off businesses at the company that was burning through the company’s profits. As a result, GE had become one of the most valuable companies in the 1990s as the market value of the company grew from $12 billion to $410 billion.

In Welch’s book “Jack: Straight From the Gut,” he described the vitality curve where managers were ranked into 3 groups. The top 20% group were known for driving rapid growth at the company. Then the vital 70% were encouraged to work their way up to the 20%. And then the bottom 10% were generally fired from the company.

– “Willingness to change is a strength even if it means plunging part of the company into total confusion for a while.”

– “Good business leaders create a vision, articulate the vision, passionately own the vision and relentlessly drive it to completion.”

– “I’ve learned that mistakes can often be as good a teacher as success.”

– “If you don’t have a competitive advantage, don’t compete.”

– “An organization’s ability to learn and translate that learning into action rapidly is the ultimate competitive advantage.”

– “Control your own destiny or someone else will.”

– “There’s no such thing as work-life balance. There are work-life choices, and you make them, and they have consequences.”

– “Be candid with everyone.”

– “Giving people self-confidence is by far the most important thing that I can do. Because then they will act.”

– “Good business leaders create a vision, articulate the vision, passionately own the vision and relentlessly drive it to completion.”

Here are some of Welch’s books that he published: 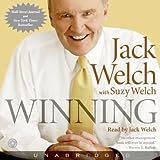 Disclaimer: Pulse 2.0 may receive a commission for purchases made through this article