Earlier this year, LG launched the LG V60 ThinQ 5G smartphone — which is a high-end 5G-enabled device with some solid specifications. LG pushed the envelope in the specifications and pricing of this device and it is being called one of the most underrated smartphones of 2020.

The LG V60 ThinQ 5G features an LG Dual Screen, which means that it has a detachable 2-screen design. Both of the screens are 6.8-inch OLED FHD. With these screens, you will be able to be easily multi-task so this device is ideal for those of you who like to be productive while on-the-go. And you can work on one screen while watching YouTube or other videos on the other screen.

The LG V60 ThinQ 5G has a triple camera on the rear: 64-megapixel standard, 13-megapixel ultra-wide, and Z-camera. And the camera features 8K recording so you the videos you record will look amazingly sharp.

On the front is a 10-megapixel camera. And the front-facing camera supports portrait mode as well.

The capacity of the LG V60 ThinQ 5G battery is 5000 mAh. This ensures that your smartphone lasts all-day. And it features AI Power Management to help prolong the usage of the device. The V60 also has wireless charging and fast charging support. Inside of the box is a 25W charger so you can you can quickly charge your V60 ThinQ 5G.

Built into the LG V60 ThinQ 5G is a Snapdragon 865 octa-core chipset and Adreno 650 graphics. These are the top-of-the-line processors for 2020. This ensures that the apps and games you use on your device are lightning-fast.

With 4 built-in microphones, the LG V60 ThinQ 5G has a Voice Bokeh feature. This feature highlights your voice and filters out background noise to make phone calls and video conferences much more clear on your end.

The LG V60 ThinQ 5G has stereo speakers: 1W at the top and 1.3W at the bottom so the audio is distributed evenly across both sides of the device for optimal sound. And it utilizes artificial intelligence to classify audio as voice, music, or sound effects for more optimized playback. Plus it has a 32-bit hi-fi quad digital-to-analog converter (DAC) for producing full sound through wired headphones.

At launch, the LG V60 ThinQ 5G was priced at $799-$949. I’m not surprised that it carries a premium price since the components built into the device have high costs associated with them also, especially when you consider that it has 5G connectivity. However, there are a number of compelling alternatives at this same price point.

Even though there is a 3.5mm jack built into the device, LG is not including headphones. This should not be a huge deal-breaker since I am assuming that most consumers already own a pair of headphones anyway.

Want to buy this device? You can find it here: 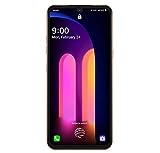