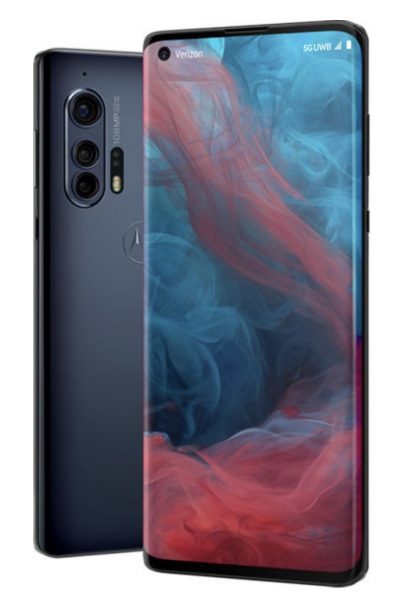 The Motorola Edge Plus was released in May of 2020 as the higher-end version of the Edge model. Motorola, which has largely focused on more budget-friendly phones in recent years, introduced the Edge Plus as their reentry into the flagship smartphone market. Some of the headline features on this Verizon-exclusive phone include its curved display, large battery, three cameras, and 5G connectivity. With Motorola being a bit rusty in the flagship realm, how does the Edge Plus perform?

The Motorola Edge Plus is built off of the capable Snapdragon 865 processor and Adreno 650 CPU, paired with 12GB of RAM, putting it on par with the Samsung S20 in terms of performance. As with many other Motorola phones, the Edge Plus is installed with a near-stock version of Android.

From the factory, it runs on Android 10 and will support major updates up to Android 12. The included My UX application allows users to better customize their Android experience however they prefer.

In terms of connectivity, the Edge Plus features 5G, greatly increasing download and upload speeds for the phone. Because of 5G’s newness, support for it isn’t the most widespread. 5G coverage will continue to rapidly expand though, allowing the Edge Plus to employ its 5G speeds in more places. The phone also has Wi-Fi 6, Bluetooth 5.1, and NFC.

One of the most notable design features of the phone is the curved, 6.7” display, which turns 90° down the side of the phone, giving it a sleek appearance. The display supports a resolution of 1080p and a smooth refresh rate of 90Hz. It also supports HDR10+, which enhances the screen’s brightness and color.

Unfortunately, the curvature of the screen does lead to quite a bit of accidental clicking and also leads Motorola to make the side buttons thinner than usual. Nevertheless, the screen looks great for displaying any media and has some added benefits, especially with mobile games. Virtual buttons can be enabled on the edge screen to give the phone a more traditional controller feel. Lights can also be enabled on the edge screen that will show various colors depending on the type of notification received.

The screen is made of Gorilla Glass 5, which was released in July of 2016. While Gorilla Glass is known for its toughness, the phone is still quite delicate due to its curved display and glass body. The phone also has no IP rating, so weatherproofing is not guaranteed. A case will definitely be preferable to maximize durability. Lying underneath the screen is a fingerprint scanner that gives a fast and consistent performance. The glass body sits on a strong aluminum chassis. 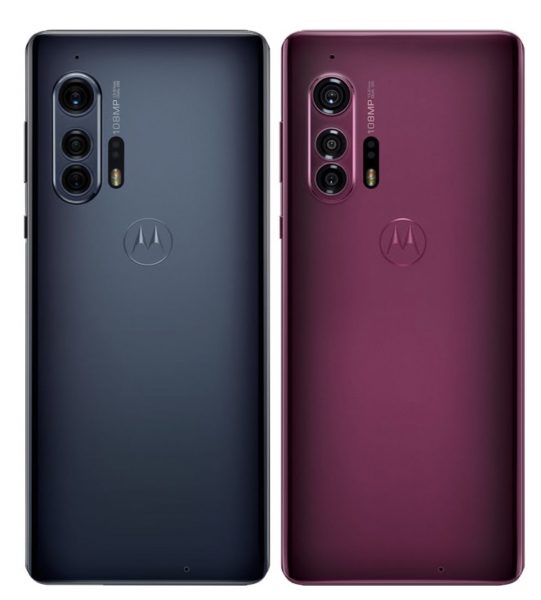 Motorola provides two colors to choose from for the device. There is the option of a grey color that has a blue tinge or a red/purple color.

Within the large camera bump on the back of the phone is housed three separate lenses. As with many other smartphones of this tier, it features a wide-angle lens, ultra-wide-angle lens, and a telephoto lens. The main wide-angle lens features a 108MP sensor with an aperture of f/1.8. The large megapixel count does well in bright situations where there’s plenty of light to be collected by the sensor’s tiny pixels and will help retain detail even with substantial cropping.

While high megapixel counts are not naturally conducive to shooting in low light due to the small size of the pixels, Motorola has combated this with quad-pixel binning. The phone will automatically combine four pixels to better bring in light. The resulting images will be 26-megapixel, still plenty for most printing needs. The main camera also has optical image stabilization.
The ultra-wide-angle lens has 16MP and an aperture of f/2.2, while the telephoto lens is 8-megapixel and has an f/2.4 aperture. The telephoto lens has 3x optical zoom and 10x digital zoom, as well as optical image stabilization. Adjacent to the camera bump is a time-of-flight sensor. The front-facing camera is 25MP and also takes advantage of quad-pixel binning.

In terms of the cameras’ actual performance, they give results on par or just below that of the phone’s competitors, such as the Samsung Galaxy S20 Plus. Color and detail are captured well in scenes with ample light. The camera does sometimes suffer from a narrow plane of focus, though, which will lead to uneven focus within an image or only a thin section of it being truly in focus. The telephoto lens has macro capabilities that allow the camera to focus much closer to objects, capturing much detail. Photographing in low light usually works well with Motorola Night Vision mode, but color and detail can be muted at times and lights often cause a bad lens flare.

To store all of the high-resolution images and videos, the Edge Plus comes with 256GB of internal storage. Unfortunately, there is no MicroSD card slot for expanding storage. The 256 gigabytes should be sufficient for most users, though you may find it limiting if you’re one to take lots of pictures and videos.

With audio, the Edge Plus features dual stereo speakers turned by Wave. The audio output quality is certainly loud and defined and delivers a great experience for viewing media. The phone also has a traditional 3.5mm headphone jack, a port missing from most flagship phones currently on the market. This means no need to have wireless headphones or mess around with an adapter.

To power the device and all of its functions, the Edge Plus has a large 5000mAh battery, one of the largest on the market. The phone is easily able to last over a day with the usual use. The included 15W Turbo Power charger with the phone can give disappointing speeds, but the phone is compatible with the 18W Turbo Power charger, which will improve performance. Additionally, wireless charging is supported and the phone can share power with other compatible phones at 5W.

At a price tag of $999 (now reduced at many retailers), the Motorola Edge Plus is a well-rounded, reasonably priced phone. It represents a great re-introduction for Motorola back into the flagship smartphone market. If you’re a Verizon and/or user looking for an upgrade without stepping into unfamiliar territory, the Edge Plus will most certainly satisfy you. Its large battery and speed are on par and at times greater, than phones of a similar tier, such as the Samsung Galaxy S20 and OnePlus 8. Though the camera can disappoint at times in low light, it still performs well and will almost always give presentable results. If price is a concern, the base model Motorola Edge or the aforementioned OnePlus 8 are viable options.

The Motorola Edge Plus has received a Pulse 2.0 score of 4 out of 5 based on the specifications built into the device relative to the price.

Want To Buy The Motorola Edge Plus? You can find it here: