Samsung Galaxy A20: Pros And Cons

Samsung Galaxy A20: Pros And Cons

The biggest advantages of Samsung’s A-line of smartphones are the price and the Galaxy A20 is no exception. You can buy a brand new Galaxy A20 for $249.99.

The Galaxy A20’s display is 6.4-inch OLED. This means that watching videos and playing games will feel like an immersive experience. And the display is edge-to-edge, meaning the bezels are thin so you have a better screen to body ratio.

Despite the low price, the Galaxy A20 has superior cameras. The front camera is an 8-megapixel with facial recognition. And there is a dual rear camera on the back with 13-megapixel as the main and a 5-megapixel (ultra-wide). The main camera has an f/1.9 aperture while the ultrawide angle camera has an f/2.2 aperture with a 123-degree angle. This enables you to capture more in every photo, especially with panoramics.

The Samsung Galaxy A20 has Dolby Atmos support, which is a surround sound format that is used in commercial cinemas and smaller home theaters. This gives the A20 superior sound quality.

The Samsung Galaxy A20 battery capacity is 4000 mAh. With this capacity, the battery life of the Galaxy A20 is rated at up to 33 hours of usage time and 13.6 days of standby time.

The Galaxy A20 has a wide variety of color options. You can buy it in black, blue, red, coral, orange, or gold.

The Galaxy A20 lacks wireless charging support. This could be inconvenient for those of you who have wireless chargers around their home.

Con: Storage Is Only 32GB

With storage of only 32GB, you can quickly run out of space if you are not constantly backing up your photos and videos or unless you buy a microSD.

Although the price on the Galaxy A20 is hard to feat, there are comparable alternatives with superior features. For example, the Moto G7 Power has a better battery capacity (5,000 Mahers) than the Galaxy A20.

The Galaxy A20 is receiving a Pulse 2.0 score of 4 out of 5. It would have received a higher score if it had wireless charging and more than 32GB of storage.

Want To Buy The Samsung Galaxy A20? You Can Get One From Here: 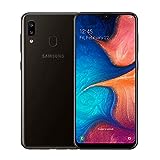