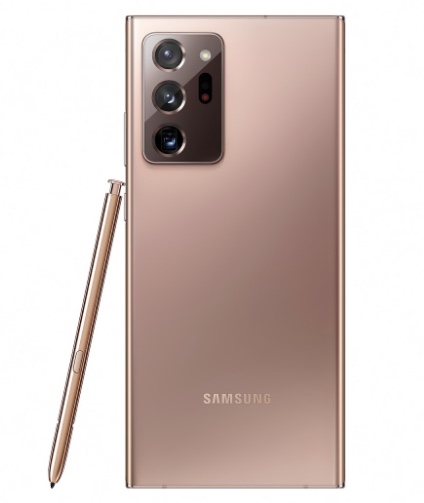 While the appeal to the design is dependent on the user, most will agree that it is sleek and well-crafted. The corners of the phone are squared-off, which contrasts well with the curved edge display. This leaves an extremely minimal bezel, giving a great movie-watching experience. A small, undisruptive pinhole at the top of the screen serves as the front-facing camera.

On the back, there is a sizable camera bump to house the three improved cameras, as well as the laser AF sensor. The camera bump receives a slightly different shade of color from the rest of the phone to complement it.

There are three colors offered for the Note 20 Ultra. The colors, which include bronze, black, and white, are subtle yet seem higher-end. 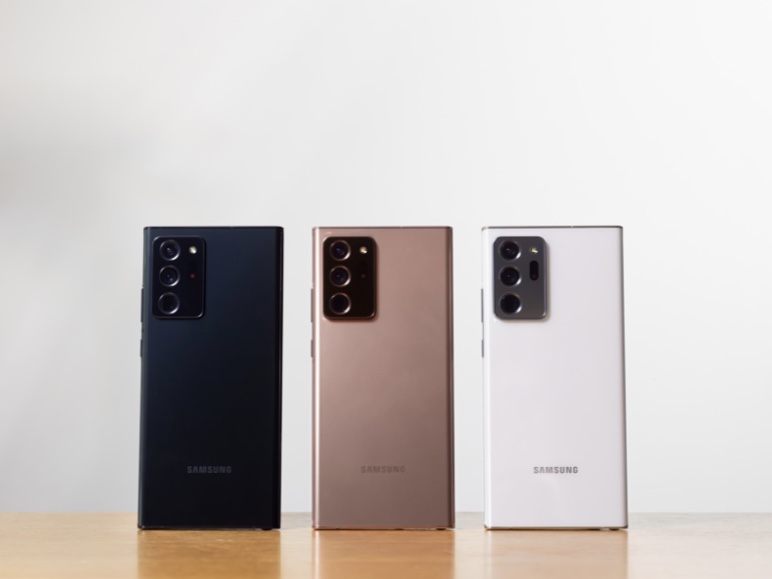 Due to the larger size of the phone, Samsung was able to fit impressive and fast components into the phone. The Note 20 Ultra runs on the Snapdragon 865+ chipset, or the Exynos 990 chipset on many international models. And the Note 20 Ultra has 12GB of RAM, 4GB more than what the base model Note 20 has.

For wireless connectivity, the Note 20 Ultra is compatible with the new 5G bands, giving the user access to much faster wireless speeds. Though 5G coverage isn’t the most extensive at the moment, it will increase rapidly as more phones are able to handle its bandwidth.

The phone offers great low-light performance, which is made even better by the laser AF sensor, helping to secure fast and accurate focus no matter the lighting situation. And the Note 20 Ultra also takes advantage of its phase-detection autofocus system to work alongside the laser AF sensor.

In terms of video resolution, the Note 20 Ultra can record at 8K, 24fps, putting it on par with some of today’s video-focused DSLRs. As with the large megapixel count, most will likely not notice a major difference between the 8K and other high-resolution options, but what this impressive resolution allows for is intense cropping and the ability to take 33MP snapshots from the video.

The phone is also capable of recording in 4K UHD at 60fps and 1080p at 120fps. There are also the options of 1080 slow-motion video at 240fps and 720p slow-motion video at 960fps, as well as HDR10+ recording. The laser AF system helps keep accurate focus while shooting video, and there are other audio options that can be configured for a more “pro-like” recording experience. On top of this, there is also a Super Steady shooting option, which stabilizes video even more so than the Video Digital Image Stabilization already does.

The front-facing camera is 10-megapixel and can also record in 4K UHD.

A significant advantage for this phone over the base model Note 20 Ultra is the ability to expand your storage, and this will be necessary given the phone’s ability to record such high-resolution photos and videos. In the SIM card tray is space for either another SIM card or a MicroSD card, which can be up to 1TB. The base model Note 20 does not possess a place for a MicroSD card. 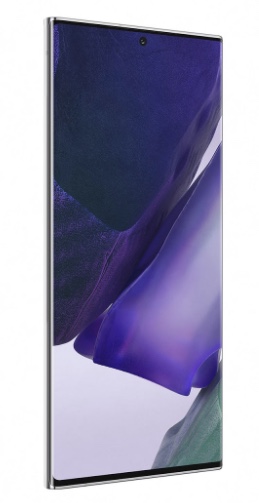 At 6.9” and a resolution of 3088×1440, the display is another aspect of the phone that is advantageous for the highly detailed photos and video, as well as enjoyable for other everyday functions. The display is AMOLED with a 120Hz refresh rate, which gives the phone a much faster feel. And as mentioned previously, the screen is curved at the edges, which gives a unique viewing experience for any kind of media.

In terms of durability, the screen uses Gorilla Glass’ new Victus glass, which boasts itself as the toughest Gorilla Glass yet. By default, the Note 20 Ultra will come with a plastic screen protector already installed.

The phone as a whole is quite durable and has the expected IP68 rating, meaning it is dust-sealed and water-resistant up to about 5 feet for 30 minutes.

The trademark feature of the Note series, the S Pen, has also been improved for the Note 20 Ultra. With the latency speed brought down to 9ms from 26ms, the new pen is much faster and works great in conjunction with the large, 120GHz refresh rate screen. And there are new gestures that allow you to control aspects of the phone without touching the S Pen to the screen.

Given the large size of the phone, it would be expected that the battery is high capacity. The Note 20 Ultra’s 4500mAh battery is slightly larger than the base model Note 20’s, though it often has slightly less battery life. This is due to the larger screen, higher refresh rate, and the high number of intense processes that the phone is capable of computing. The battery life is nevertheless good.

According to PhoneArena, the Note 20 Ultra will last about 12 hours when the screen is switched to 60Hz. If the refresh rate is on auto mode, which means it will automatically switch between 60Hz and 120Hz depending on the need, the life drops to about 9 hours and 30 minutes. With reasonable phone usage and periodic charging, though, the user should have no problem making it through the day without the phone dying. On top of this, Samsung states the phone can be charged to 100% in just an hour with the 25W Super Fast charger, which is shipped with the phone.

While some may find the camera bump appealing and others may find it ugly. It is without doubt quite large compared to other phones’ camera bumps. Since it sticks out more, this also makes it more susceptible to damage. If you prefer a small camera bump, then many cases for the Note 20 Ultra will extend to the height of the camera bump so it is reduced or flat.

Given the phone’s large, curved-edge screen, it is much easier to accidentally tap the screen. While this is not a major issue, it may be an annoyance to some. A case would also remedy this as it serves as a larger bezel for the phone.

As with many phones announced in recent years, the Note 20 Ultra has no headphone jack. Wireless headphones or a headphone jack to USB-C adapter will have to be purchased separately.

Being the Ultra model of Samsung’s highest-end series of smartphones, the Note 20 Ultra is expensive. The phone is priced at $1,300. But at this price, you get a highly capable, feature-rich phone with one of the best camera systems currently offered in the smartphone industry. On top of this, the price will become more affordable as time passes.

Based on the specifications and the pros definitely outweighing the cons, the Samsung Galaxy Note 20 Ultra has received a Pulse 2.0 score of 4.5 out of 5.

Want To Buy A Samsung Galaxy Note 20 Ultra? Here Are Some Options: