Apple recently announced the new version of the AirPods — which are also known as AirPods 2. The Apple AirPods announcement was made in the same week as a new iMac, a new iPad mini, and a new iPad Air. And next week, Apple is reportedly going to announce the availability of the AirPower charging mat and a TV and news subscription service.

Some of the most noteworthy AirPods 2 features are the H1 chip, the standard charging case (or optional wireless charging case), and hands-free Siri. Each of the cases holds additional charges for more than 24 hours of listening time and it ensures that AirPods are charged and ready to go.

In terms of the design, the AirPods 2 look identical to the first-generation. This means it looks like the Apple EarPods that come with the iPhone and iPod touch, but without wires. 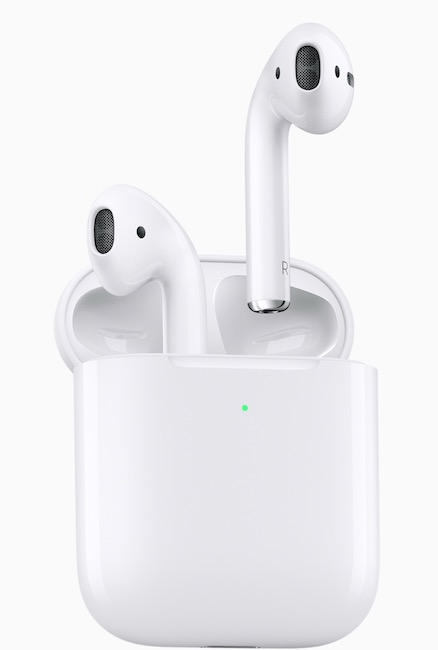 The H1 chip was built with custom audio architecture to create a better audio experience and improved synchronization. This means that it is much more seamless to switch between the iPhone, iPad, or Apple Watch. In fact, Apple made it two times faster to connect.

Plus it provides the convenience of hands-free “Hey Siri.” With the “Hey Siri” feature, the AirPods 2 makes it easier to switch songs, make phone calls, adjust the volume, and get directions.

“AirPods delivered a magical wireless experience and have become one of the most beloved products we’ve ever made. They connect easily with all of your devices, and provide crystal clear sound and intuitive, innovative control of your music and audio,” said Apple’s SVP of Worldwide Marketing Phil Schiller in a statement. “The world’s best wireless headphones just got even better with the new AirPods. They are powered by the new Apple-designed H1 chip which brings an extra hour of talk time, faster connections, hands-free ‘Hey Siri’ and the convenience of a new wireless battery case.”