Apple is warning users to ignore calls that say it is from them unless you have specifically requested for a support call through its official online support website. Phone scammers have been increasingly spoofing Apple in order to gain unauthorized access to Apple iCloud accounts.

While these phone calls appear to be officially from Apple, it is a scam that is known as phishing. You may have seen something similar with emails from corporations like PayPal and Microsoft where it appears to be from an official service, but it contains malicious links.

With the phone scam, the person that calls with the fake Apple phone number claims to be an employee of AppleCare or Apple customer service in order to fool the victim. This is known as “Caller-ID spoofing.” The scammer is able to appear to be an Apple support representative by calling from the phone number 1 (800) MYAPPLE. Since the Apple phone number is spoofed, tapping on the “i” (information) button leads the victim to a contact that prominently features the Apple logo and headquarters address — which makes the spoof call seem even more legitimate. This is what it looks like when you tap on the “i” button. 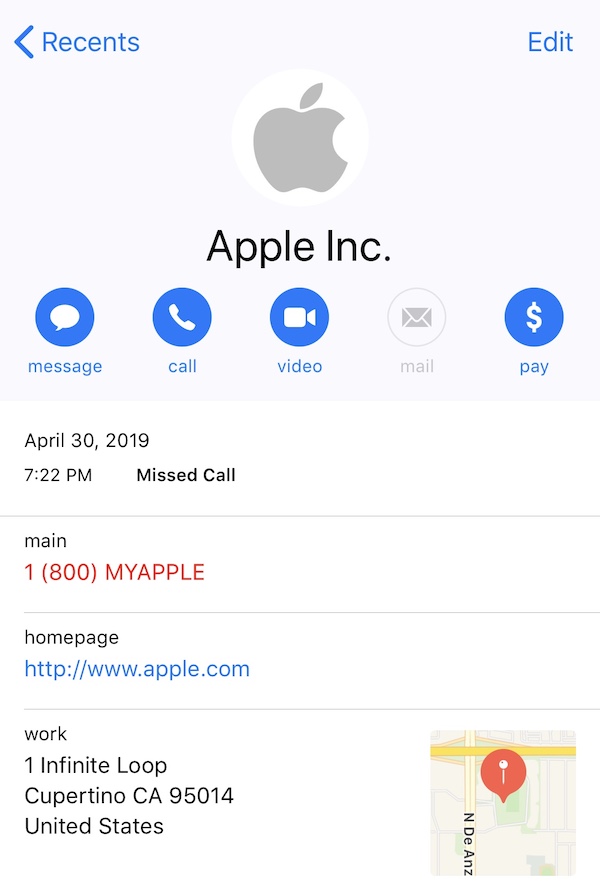 “Caller-ID spoofing, when callers deliberately falsify information transmitted to a phone’s caller ID to disguise their identity in an effort to extract personal information or money, has become an increasingly acute problem for cellphone users. One particularly sophisticated attempt that has been active since at least the beginning of 2019 mimics the number and logo associated with a call from Apple customer support,” says the Snopes.com website in a description about Caller-ID spoofing.

Generally, the scammer on the other end will tell the victim that their account has been compromised or they will claim that there has been a data breach. Or sometimes there will be an automated message that asks the victim to press 1 in order to connect to the scammer.

Apple is aware of the issue and published a support page about it. “Scammers spoof phone numbers and use flattery and threats to pressure you into giving them information, money, and even iTunes gift cards. Always verify the caller’s identity before you provide any personal information. If you get an unsolicited call from someone claiming to be from Apple, hang up and contact us directly,” says the Apple support page.

You should also keep in mind that Apple will never ask you for your Apple ID password, iCloud information, or verification codes over the phone. If you are actually having trouble with your device or login, then you should call Apple support directly or take your device to an Apple store.