This announcement was made on stage at Apple’s Special Event on Monday. At the star-studded event, Oprah Winfrey went on stage to discuss some of the documentaries she was creating for the service. Steve Spielberg also went on stage to highlight the remake of “Amazing Stories.” Steve Carell, Reese Witherspoon, and Jennifer Aniston appeared on stage to announce their drama program called “The Morning Show.” Jason Mamoa and Alfre Woodard introduced a science fiction drama called “See.” And Kumail Nanjiani unveiled a new series called Little America — which is being put together with his wife and writing partner Emily V. Gordon. Plus Sara Bareilles and JJ Abrams are partnering on a music drama series called “Little Voice.”

“We’re honored that the absolute best lineup of storytellers in the world — both in front of and behind the camera — are coming to Apple TV+,” said Apple’s senior vice president of Internet Software and Services Eddy Cue in a statement. “We’re thrilled to give viewers a sneak peek of Apple TV+ and cannot wait for them to tune in starting this fall. Apple TV+ will be home to some of the highest quality original storytelling that TV and movie lovers have seen yet.”

Apple is also debuting a new Apple TV app and Apple TV channels in May 2019. The Apple TV app is going to bring together different ways to discover and watch sports, movies, TV shows, news, etc. in one place across iPhones, iPads, Apple TVs, Macs, smart TVs, and streaming devices. 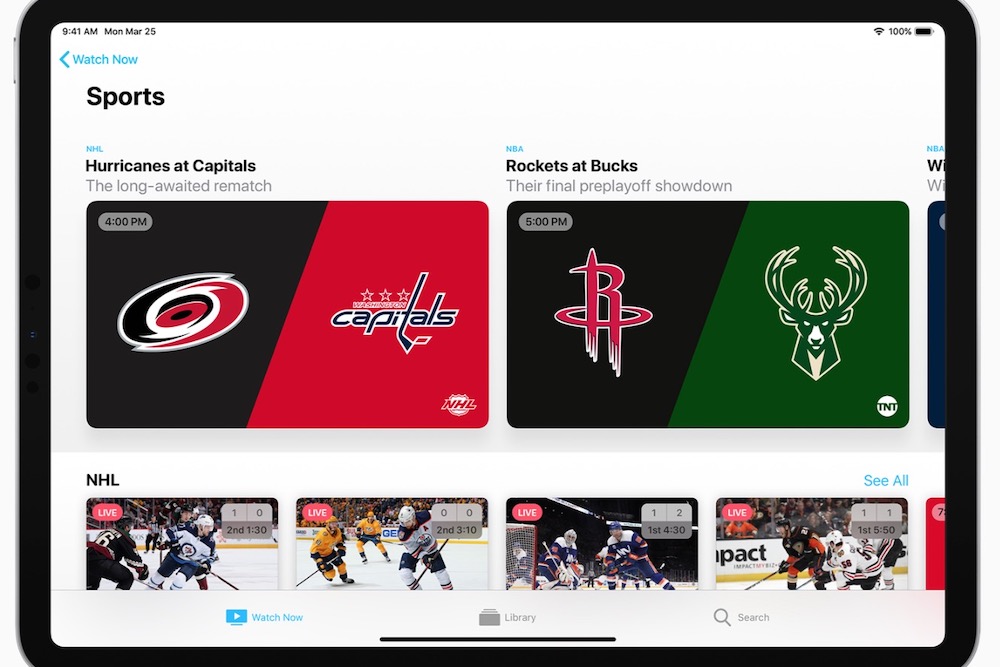 The Apple TV channels are available à la carte and can be watched in the Apple TV app starting in May. Additional apps, accounts, and passwords are not required. Some of the Apple TV channels include HBO, Starz, SHOWTIME, CBS All Access, Smithsonian Channel, EPIX, Tastemade, Noggin, and MTV Hits. All of these channels are on-demand and available online and offline. And users can also watch sports, news, and network TV from cable and satellite providers along with renting iTunes movies and TV shows within the new Apple TV app.

The new Apple TV app will also personalize what viewers love watching across their existing apps and services while developing a secure and comprehensive understanding of users’ viewing interests. And the app will also offer suggestions for shows and movies from over 150 streaming apps including Amazon Prime and Hulu along with pay-TV services like Canal+, Charter Spectrum, DIRECTV NOW and PlayStation Vue. And Suddenlink from Altice is going to be added later this year.

The pricing and availability for the Apple TV+ video subscription service is going to be announced later this fall. With Family Sharing, users will be able to share Apple TV+ and subscriptions to Apple TV channels. And the Apple TV app will be available on Samsung smart TVs starting this spring and on Amazon Fire TV, LG, Roku, Sony, and VIZIO platforms in the future. Later this year, customers will VIZIO, Samsung, LG, and Sony smart TVs will be able to play videos and other content from iPhones or iPads directly to smart TVs with AirPlay 2 support.

To put together this slate of original programming, Apple hired former Sony executives Jamie Erlicht and Zack Van Amburg as the co-heads of video programming back in June 2017. The pair oversaw the development of hit shows like Breaking Bad, Better Call Saul, The Goldbergs, Rescue Me and The Crown.