Apple watchOS 7: These Are The New Features

Apple watchOS 7: These Are The New Features

At the Worldwide Developers Conference, Apple unveiled the new features coming to watchOS 7. Here’s a list of the new Apple watchOS 7 features:

watchOS 7 also supports shareable and discoverable watch face configurations. There are customizable and personalized faces, inclusive of complications, which can be shared through Messages or Mail and discovered through the App Store or even from links through websites and social media channels.

And watchOS 7 offers updates to faces for more personalization and greater access to favorite apps. The detailed and ultraprecise Chronograph Pro includes a tachymeter to calculate speed based on time traveled over a fixed distance, the Photos face has color filters, and the bold X-Large face now has an option to add a rich complication.

Developers now have the option to offer more than one complication per app on a single watch face. For example: on one watch face, Glow Baby can display multiple complications that help new parents track bottle-feeding, breastfeeding, pumping statistics, nap times, etc. while Dawn Patrol can show surfers tide, wind speed, and water temperature from their surf spots.

The Shortcuts app is also now on Apple Watch. 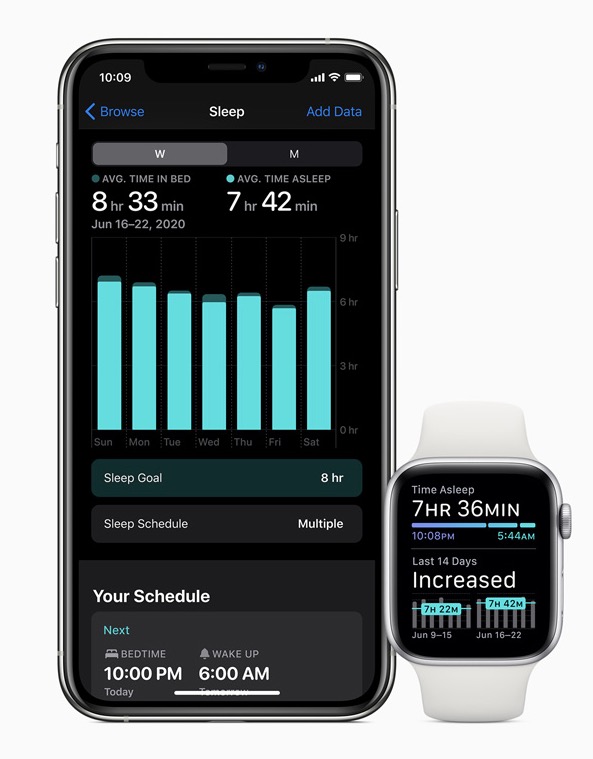 The sleep tracking feature on watchOS 7 is taking a holistic approach to sleep by providing valuable tools to help users get the desired amount of sleep, get to bed on time, and setting up a pre-bedtime routine to meet their sleep goals. And through the detection of micro-movements from the watch’s accelerometer — which signals respiration during sleep — Apple Watch intelligently captures when the wearer is sleeping and how much sleep they get each night. In the morning, the user will see a visualization of their previous night’s sleep, including periods of wake and sleep. And they will also see a chart showing their weekly sleep trend.

Bedtime routines help the body prepare to sleep, according to the American Academy of Sleep Medicine. And to support this, Wind Down allows Apple Watch and iPhone users to set up customized routines before going to bed, including setting up scenes in the Home app, automatically playing soundscapes, or activating meditation apps. And while in Sleep Mode, the Apple Watch turns on Do Not Disturb mode and it automatically darkens the screen. 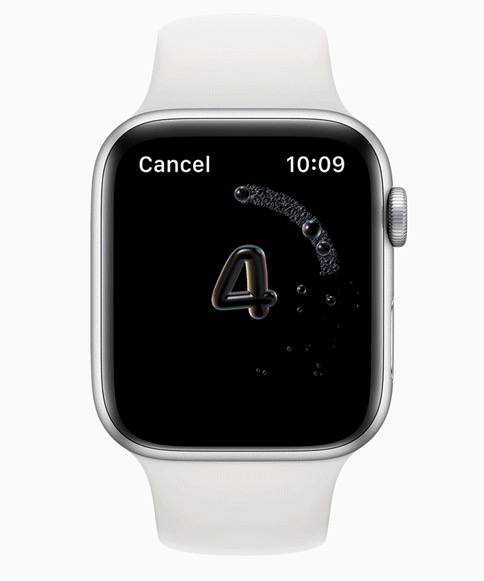 With the current health crisis, washing your hands is especially crucial and should be done for at least 20 seconds to help prevent the spreading of illness. The Apple Watch can use motion sensors, the microphone, and on-device machine learning to automatically detect hand washing motions and sounds. Then it launches a 20-second countdown timer. If the user finishes early, then they will be promoted to keep washing. The sounds used to detect hand washing are not automatically recorded or saved by the Apple Watch or Health app.

To capture calorie exertion for Dance, Apple Watch uses advanced sensor fusion, combining data from the heart rate sensor and inputs from the accelerometer and gyroscope that account for the unique challenges of measuring different body-to-arm motions typical with dance. And this workout type was validated and tested with four of the most popular dance styles for exercise: Bollywood, cardio dance, hip-hop, and Latin.

watchOS 7 is adding further support for hearing health with headphone audio notifications. In the previous version of watchOS, Apple added a Noise app to measure ambient sound levels and duration of exposure. With this feature, customers are able to understand how loudly they are listening to media through their headphones.

After total listening with headphones has reached 100% of the safe weekly listening amount, Apple Watch provides a notification to the wearer. According to the World Health Organization, a person can be exposed to 80 decibels for about 40 hours per week without any impact on hearing abilities. And customers can also see how long they have been exposed to high decibel levels each week in the Health app on the iPhone and can control the maximum level for headphone volume. No audio from the headphone audio notification feature is recorded or saved by the Health app or Apple Watch.

In order to provide optimal convenience while biking, cycling directions are now available on the wrist. The directions are large and easy to read. And Maps are able to direct when to dismount and walk the bike or take the stairs to save time. This enables the wearer to choose a route that avoids steep hills and get to their destination even faster.

watchOS 7 is expected to arrive for the public this fall. With watchOS 7, Apple is also rebranding the Activity app as it will now be called Fitness. watchOS 7 will work on the Apple Watch Series 3 and later. And you will also need an iPhone 6S or later to have an iPhone that pairs with an Apple Watch running watchOS 7.