Mixtroz: This Alabama-Based Startup Launched By A Mother-Daughter Team Raises Over $1 Million

Mixtroz: This Alabama-Based Startup Launched By A Mother-Daughter Team Raises Over $1 Million

Mixtroz is a Birmingham, Alabama-based startup that has raised more than $1 million to further build up its networking software platform, which connects people at live events in real-time. Mixtroz is considered one of the first minority and woman-owned startups to raise over $1 million. 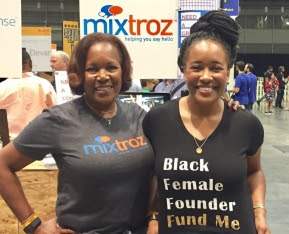 “Achieving this milestone is a huge success for us, especially considering  we are black, female, non-technical tech founders,” said Schrader, who is also CEO of Mixtroz and a former HR executive. “As a startup, Birmingham has proved to be a perfect homebase for us. They have figured out how civic, corporate and tech ecosytems must come together to breed success, and we attribute a lot of our accomplishments to the supportive business community here. In fact, we would not have reached this milestone without the active support from Innovation Depot’s Velocity Accelerator; Bronze Valley, a Birmingham-based venture platform focused on diverse founders; as well as local corporations and businesses; and of course Birmingham’s robust investor community.”

Mixtroz’s networking software can be used at events where 25 or more people are attending. By driving attendees to go from phone to face-to-face meetings, it sparks dynamic conversations. And the event hosts gain valuable data on those interactions.

Mixtroz enables organizers and sponsors to tailor specific questions in order to capture data from event attendees. This reduces the need to set up “icebreaker” games as a way to create matches for the attendees.

“The fact that we were able to acquire prestigious clients clearly shows that there is a real need for our product. People attend events to make valuable connections. In the digital age, if the main motivation was to consume content, we’d all just livestream at home. Mixtroz is a way to make the most of your time when you have decided to make the effort to leave the house and attend an event,” added Ammons — who is COO of Mixtroz and was the first intern to NBA star LeBron James.