Founded in 2011 by Dr. Vijay Balasubramaniyan, Dr. Paul Judge and Dr. Mustaque Ahamad, Pindrop is considered a leader in secure and convenient voice interactions. And the company is known for building the leading technology in voice biometrics security. And with this funding round, Pindrop will build additional products and continue developing partnerships with global channels, consumer Internet of Things organizations, and telecommunications leaders. For example, Pindrop will provide security and identity solutions for voice-assisted smart devices like the Google Home, smart locks, and connected cars.

EDBI will help Pindrop drive its progress in Asian markets. And Dimension Data (a subsidiary of Japan-based NTT Group) is partnering with Pindrop to leverage its worldwide systems integrator and reseller network. EDBI chief executive and president Chu Swee Yeok said that Pindrop’s AI voice security technology will be a significant enabler for wider voice UI adoption beyond call centers. And Dimension Data’s Group Executive for Customer Experience Nemo Verbist pointed out that Pindrop’s solution solves a key set of problems around security and identity in voice.

“Our broad range of investors collectively view Pindrop as the established industry leader for securing the future of voice as it moves beyond the voice channel and towards voice-enabled devices,” said Balasubramaniyan in a statement. “This investment enables us to quickly boost our advancements in consumer IoT and voice technology while also continuing to strengthen our market leading solutions for anti-fraud and authentication solutions for the global enterprise.”

Pindrop’s patented Pindrop Protect technology is able to be run in the background of the calls and factors location, behavior, audio, voice, time of day, and device type to confirm the caller’s identity. 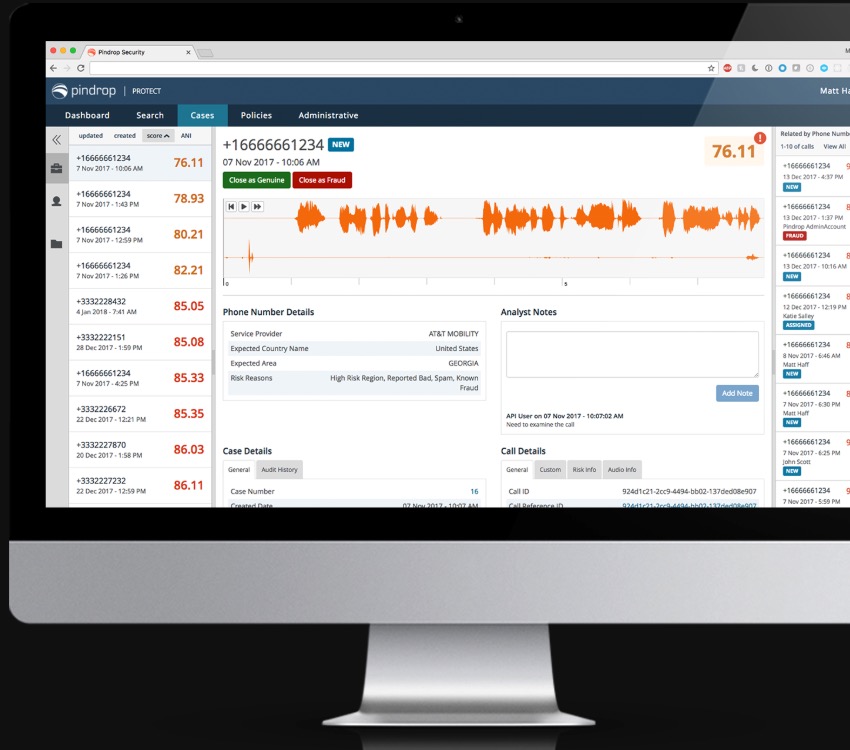 And currently, eight of the ten largest banks and five out of the seven largest insurance companies in the U.S. are Pindrop’s customers. Pindrop also saw a 137% compounded annual growth rate (CAGR) in revenue in the past three years. Pindrop currently protects more than 200 million consumer accounts and it stopped over $350 million in voice-based fraud and attacks in 2018. Plus Pindrop is expecting triple-digit growth in EMEA bookings next year.

“One of our key goals is to help leading high-growth companies like Pindrop grow in Europe and internationally,” added Vitruvian Partners senior partner David Nahama. “We are confident that Pindrop is poised for massive expansion given the company’s depth of engineering expertise, pioneering efforts in machine learning technology and patent portfolio.”

“Voice-enabled interfaces are expanding how consumers interact with IoT devices in their everyday lives – as well as IoT manufacturers’ ability to offer smarter and stronger solutions,” explained Allegion Ventures President Rob Martens. “We’re excited about the future of voice technology and see Pindrop as a pioneer in the space. We look forward to working with Vijay and his team to accelerate the adoption of voice technology into new markets.”

According to VentureBeat, Balasubramaniyan started to develop the idea behind Pindrop in 2010 as he was traveling in India. When he tried to buy a new suit from a local tailor, his bank blocked the transaction as it was flagged as suspicious. The bank repeatedly tried to call him to verify the purchase but was unable to verify his identity over the phone. After receiving a PhD from Georgia Institute of Technology with a dissertation on analyzing phone calls to determine unique characteristics (known as “phoneprinting”), Balasubramaniyan connected with Ahamad (his former academic advisor) and Judge.