Samsung has recently confirmed that it is releasing a foldable device — which is expected to be called the “Galaxy X” (or Galaxy F). In conjunction with Samsung’s announcement, Google also said that it is going to design software that supports foldable displays.

We just announced support for foldables at #AndroidDevSummit, a new form factor coming next year from Android partners.

According to CNET, Samsung’s senior vice president of mobile marketing Justin Denison showcased the “Galaxy X” at the company’s fifth annual developers conference in San Francisco this week. The “Galaxy X” is a tablet when it is opened and it is a smartphone when it is closed. And the “Galaxy X” device is able to run three apps at the same time through the Multi Active Window feature.

“The Infinity Flex Display represents an entirely new mobile platform,” said Denison via CNET. “We’ve been living in a world where the size of your screen can only be as large as the device itself. We’ve added a new dimension to help you browse, watch and multitask like never before.” 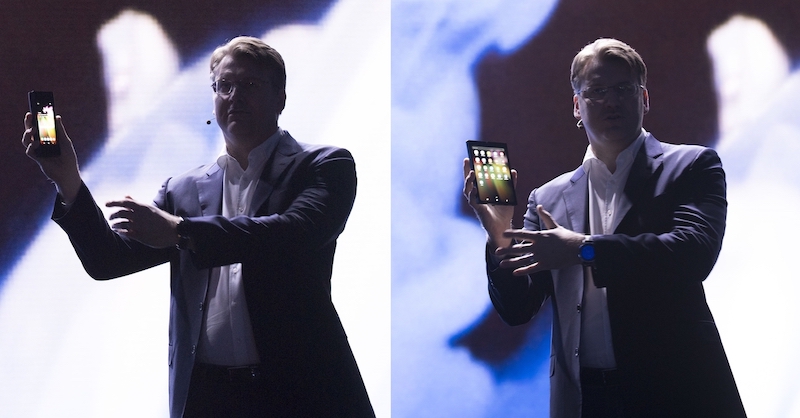 Samsung engineering director and the head of the system software group for the mobile business Jisun Park also said that the plan for “Galaxy X” is to have the battery last as long as current Galaxy smartphones. This would be very impressive because the display is quite a bit bigger than smartphones.

Interestingly, a company called Rouyu Technology unveiled the Flexpai flexible smartphone last month. You can see what it looks like in this demo video: