Keyto, an online health company that developed a smart breath sensor that is able to detect when the body is in ketosis (a state when fats are burned rather than sugars and carbohydrates), has raised $2.5 million in a seed round of funding led by Craft Ventures, which is an early-stage venture capital fund that lists David O. Sacks as co-founder.

Keyto also developed a scientific app that connects to the smart breath sensor. The app provides personalized food and lifestyle recommendations on the individual’s physiology.

You can use Keyto by simply breathing into the cylindrical device. The results are displayed on the Keyto app, which shows a “Keyto Level” score. The higher the level, the greater the state of ketosis and more efficient the fat burn.

Keyto was founded by a team of metabolic and weight loss experts who have product design experience, including Dr. Ethan Weiss, Dr. Ray Wu, Liane Nakamura, and Gareth Everard. The company is headquartered in San Francisco.

When the body enters nutritional ketosis, the liver makes ketones from fatty acids and releases it into the bloodstream. Some of the traditional methods for detecting ketones include urine strips, which are often messy and inaccurate. And blood tests are painful and expensive. Keyto is able to detect a byproduct of ketone production (acetone) in the breath of users.

“Over the past year, the ketogenic diet has become one of the most popular diets in the United States. We believe the market is ripe for a device like Keyto, which can help people reach their goals more effectively,” said Sacks. “The Keyto team’s proven track record combined with the unique form factor of its product make it a very compelling investment.” 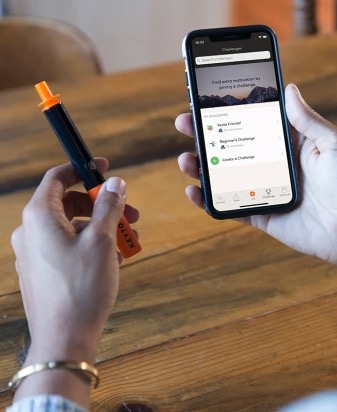 With this round of funding, Keyto will be expanding the research and development of its proprietary gas nanosensor along with manufacturing capabilities. This funding announcement also coincides with the launch of the company’s presale campaign on Indiegogo.

“The caliber of our investment partners is a testament to the strong product we have built over the past year. We can now bring one of the most promising and sophisticated health programs to market,” added Dr. Weiss. “We have made the science behind the ketogenic diet simple with a device that can track metabolism in real-time paired with an app that provides actionable recommendations to help people lose weight fast while maintaining healthy lifestyles.”