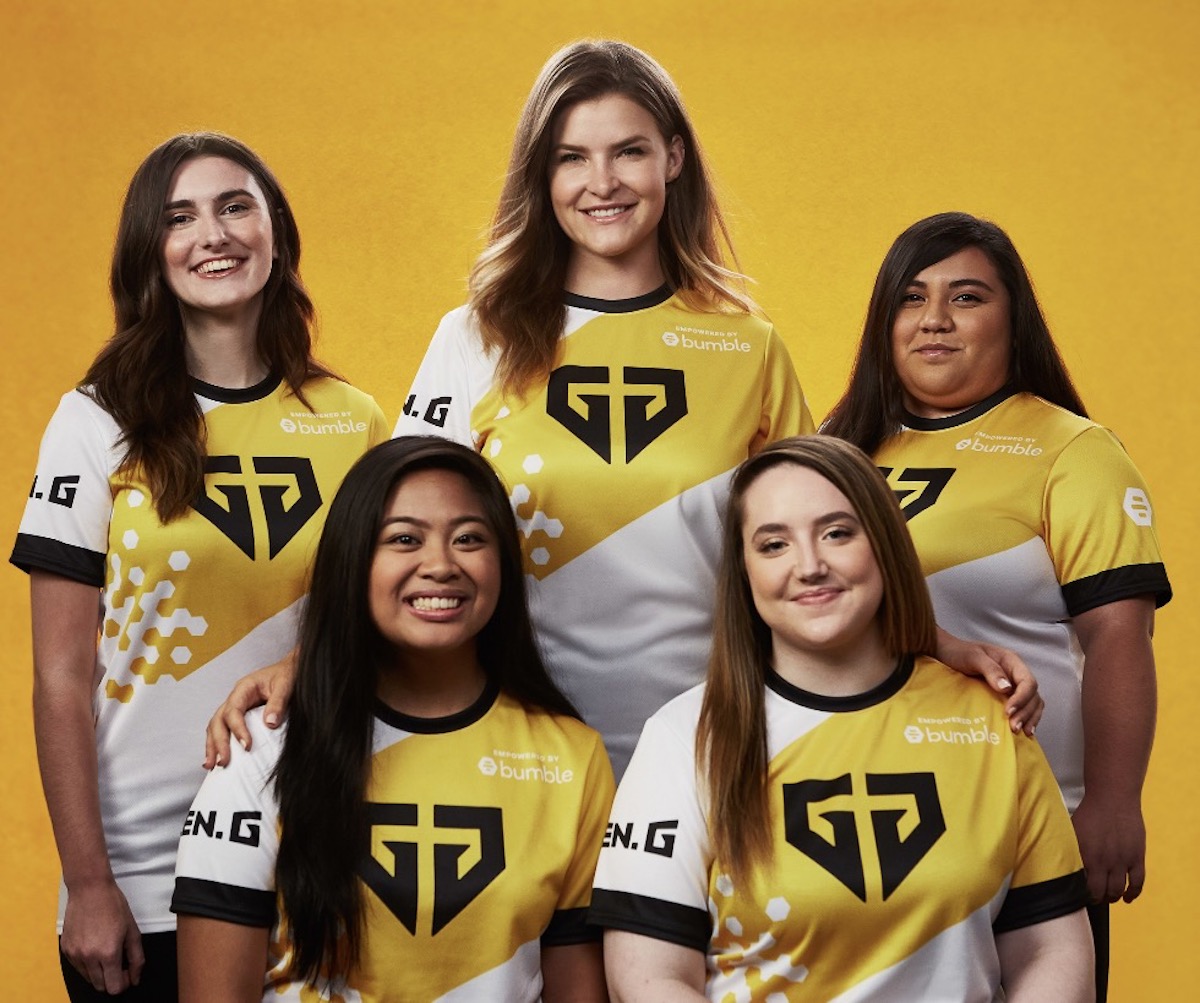 Bumble — the women-first social networking app with over 65 million users worldwide — and global esports organization Gen.G that connects the best gamers in the US and Asia recently announced that the two brands will form Gen.G’s first-ever all-women esports team called Gen.G Empowered by Bumble (Team Bumble).

This partnership brings together two organizations to create and promote a healthy environment in which all esports athletes can succeed and connect with one another. The team includes Madison Mann (“maddiesuun”), Kristen Valnicek (“KittyPlays”), Tina Perez (“TINARAES”), Carlee Gress (“Carlee”), and Hannah Reyes (“Hannah”).

Bumble also added a “gaming” badge that Bumble BFF users can now use to easily showcase on their profiles. And gamers on Bumble BFF can now filter their matches to easily find other gamers to connect within their communities.

Plus Bumble will become an official partner for Gen.G’s Head of New Gaming Initiatives Kristen Valnicek (@KittyPlays) as well as partner to #TeamKitty, a network of hundreds of women gamers and streamers organized by KittyPlays. Gen.G and Bumble will also develop custom content and deploy a series of activations including co-hosted events, live-streaming opportunities, etc. while utilizing KittyPlays and #TeamKitty.

“I’m honored to partner with Bumble to make a lasting impact in gaming! Bumble is a visionary company in technology, media, women’s empowerment, and facilitating human connection, which perfectly aligns with my own vision of inspiring positivity and empowering my audience,” said Valnicek. “Bumble is in the unique position of providing value to an entire generation of gamers, encouraging them to strive for their goals and facilitating ways to connect them IRL. The future is bright and I can’t wait to see the impact we make together!”

The Team Bumble esports team will consist of professional Fortnite players competing in the biggest tournaments worldwide along with a select group of passionate gaming influencers. And Gen.G and Bumble will also co-develop custom merchandise for the Fortnite team and other Gen.G championship teams. Plus the Bumble esports team will have a dedicated Bumble streaming room at the Gen.G training facility in Los Angeles — which will host professional players and streamers.

“Our mission at Bumble is to empower women around the world, and we’re proud to partner with Gen.G to continue expanding into the esports and gaming communities,” added Chelsea Cain Maclin, the VP of Marketing at Bumble. “We’re trying to support the women who are already building incredible communities in gaming. We’ve built strong communities through Bumble and Gen.G and we’re excited to work together to help bring the gamer community together in real life. Together with Gen.G, we want to empower women trailblazers, and make it easier for them to connect with their community whether it be through dating, friendship, or networking.”

The partnership comes on the heels of Gen.G’s $46 million round of funding from investors like Will Smith, Keisuke Honda, New Enterprise Associates, Battery Ventures, and Canaan Partners.

“We take seriously our opportunity and responsibility to support emerging segments of the esports community, especially by creating and strengthening platforms for women,” explained Gen.G CEO Chris Park. “Within Gen.G and beyond, we are building a platform that reflects and enthusiastically champions the diversity of our global fan base. The indispensable voices of women in our executive team — including our Head of New Gaming Initiatives, Head of US Content, and Head of Creative Design & Merchandising — are no doubt key to realizing this mission. But we can and need to do so much more. Bumble’s partnership with Gen.G will create more inclusive, supportive environments in which all passionate esports athletes can compete and connect.”

Bumble CEO Whitney Wolfe Herd founded the women-first social networking platform in 2014. And it is a subsidiary of MagicLab, which is a group of dating apps founded by Andrey Andreev that also includes Badoo, Lumen, and Chappy.

No matter the type of relationship, women make the first move on Bumble. Bumble holds its users accountable for their actions and has zero-tolerance for hate, aggression, or bullying. Bumble is available in 150 countries. And since 2014, Bumble has facilitated over a billion women-led first moves and over ten billion messages sent.

“Here at Gen.G we really pride ourselves on providing the best resources and support for all of our pro players—regardless of their gender. Now, with Bumble on board, we can level up our support of Maddie, Tina, Carlee, and Hannah, who are some of the best female Fortnite players in the world. I’m excited to see where Team Bumble takes them and how it shifts the narrative for women in esports as a whole,” noted Saira Mueller — the Head of US Content for Gen.G and the founder of the Women of Esports Foundation.

Gen.G is represented in the Overwatch League by ‘Seoul Dynasty’. And ‘Gen.G LoL’ is was a League of Legends won the 2017 League of Legends World Championship in Beijing. The ‘Gen.G HotS’ team burst onto the scene in 2017 by winning the Heroes of the Storm Global Champions at BlizzCon 2017 and in 2018. And Gen.G’s PlayerUnknown’s Battlegrounds team ‘Gen.G PUBG’ claimed the third-person perspective title in the PUBG Global Invitational 2018. A Chinese team called ‘Gen.G Clash Royale’ and a US-based Fortnite team were announced in 2018.