Lithium-ion batteries are ubiquitous as it is used in smartphones, laptops, electric vehicles, and power tools. Despite its wide usage, there are a number of misconceptions about how to extend the life of lithium-ion batteries. So University of Michigan researchers meticulously pored through academic papers and user manuals along with information on customer-support websites to come up with a list of 9 best practices for lithium-ion battery lifetime extension. The findings of this research were published on February 15 in the Journal of Energy Storage. 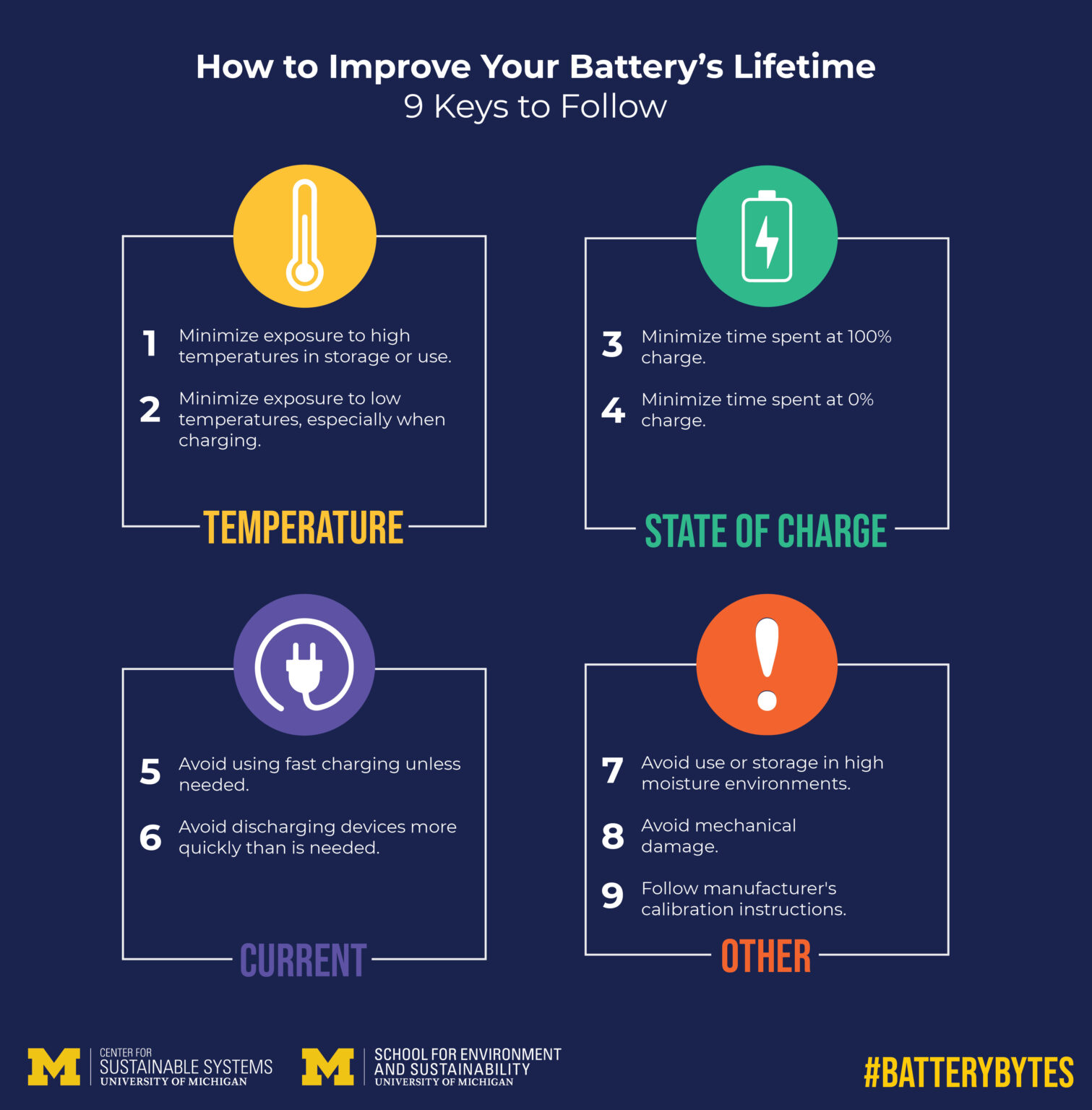 “By minimizing exposure to the conditions that accelerate degradation, batteries can last longer. And this has a positive environmental impact, as battery production is a source of greenhouse gas emissions and many other pollutants,” said study senior author Greg Keoleian, who is director of the U-M Center for Sustainable Systems at the School for Environment and Sustainability. “Additionally, there are significant financial incentives for users to avoid adverse conditions, as the cost of lithium-ion batteries can range from 5% to over 50% of a product’s cost.”

Some of the recommendations from manufacturers include avoiding temperature extremes — both high and low — when using or storing lithium-ion batteries. And elevated temperatures can accelerate the degradation of almost every battery component and can lead to significant safety risks, including fire or explosion.

So if a laptop or cellphone is hot while it’s charging, unplug it. And minimize exposure to low temperatures especially when charging. And for electric vehicles, nearly all manufacturers warn about high temperatures in their owner manuals. Manufacturers also advise parking in the shade and keeping the vehicle plugged in during hot weather which allows the battery cooling system to run as needed. Plugging in the vehicle in cold weather is also recommended so the battery heating system can run on grid power.

It is also recommended that you minimize the amount of time the battery spends at either 100% or 0% charge. These are known as extremely high and low “states of charge” stress batteries. And you should consider using a partial charge that restores the battery to 80% SoC instead of 100%. If this not possible, then unplug the device as soon as it reaches 100%.

LG and Samsung suggest that their phones should be recharged once the devices reach 20%. And Nokia and Sony cited potential damage to their phones if it is left charging after reaching 100%. 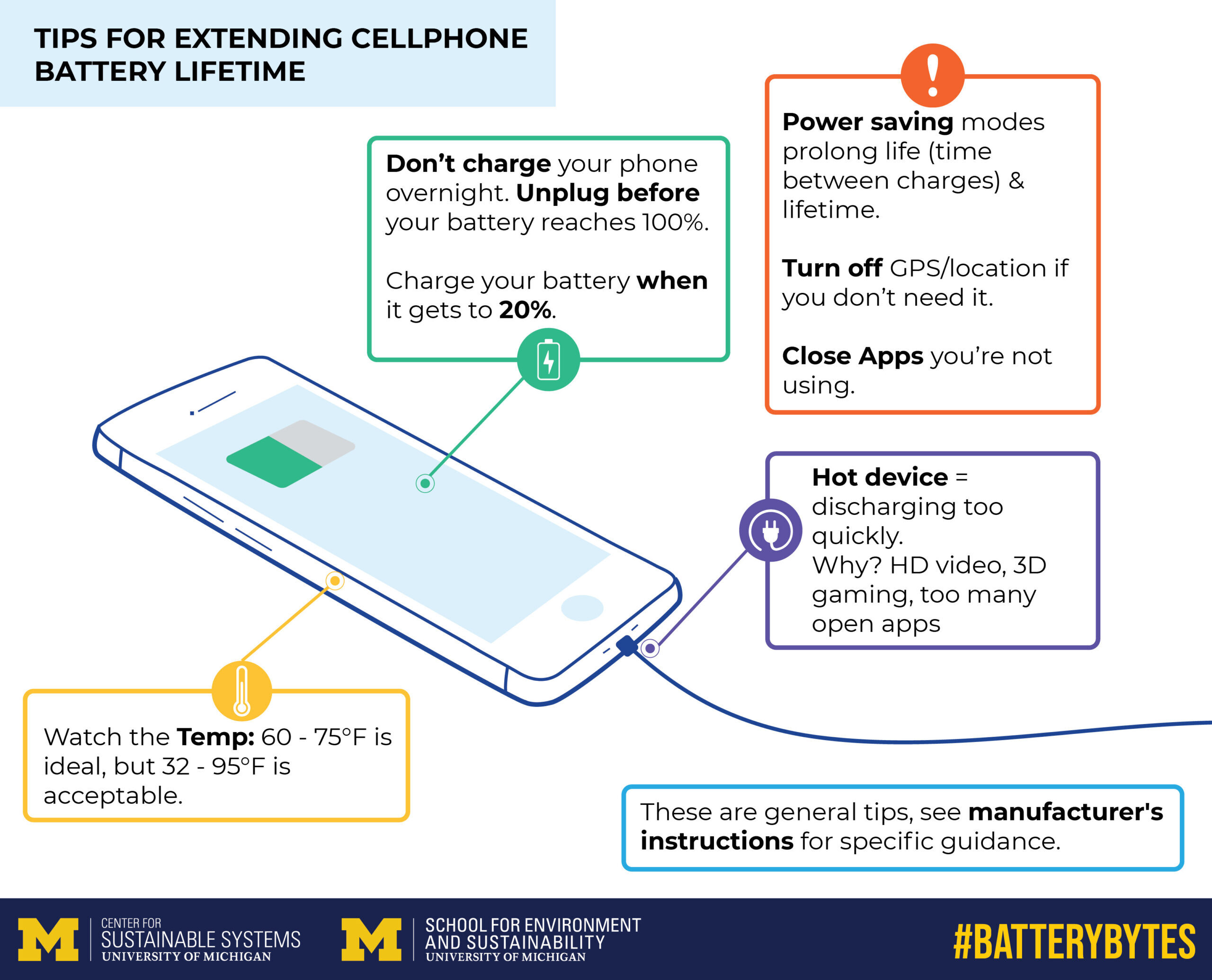 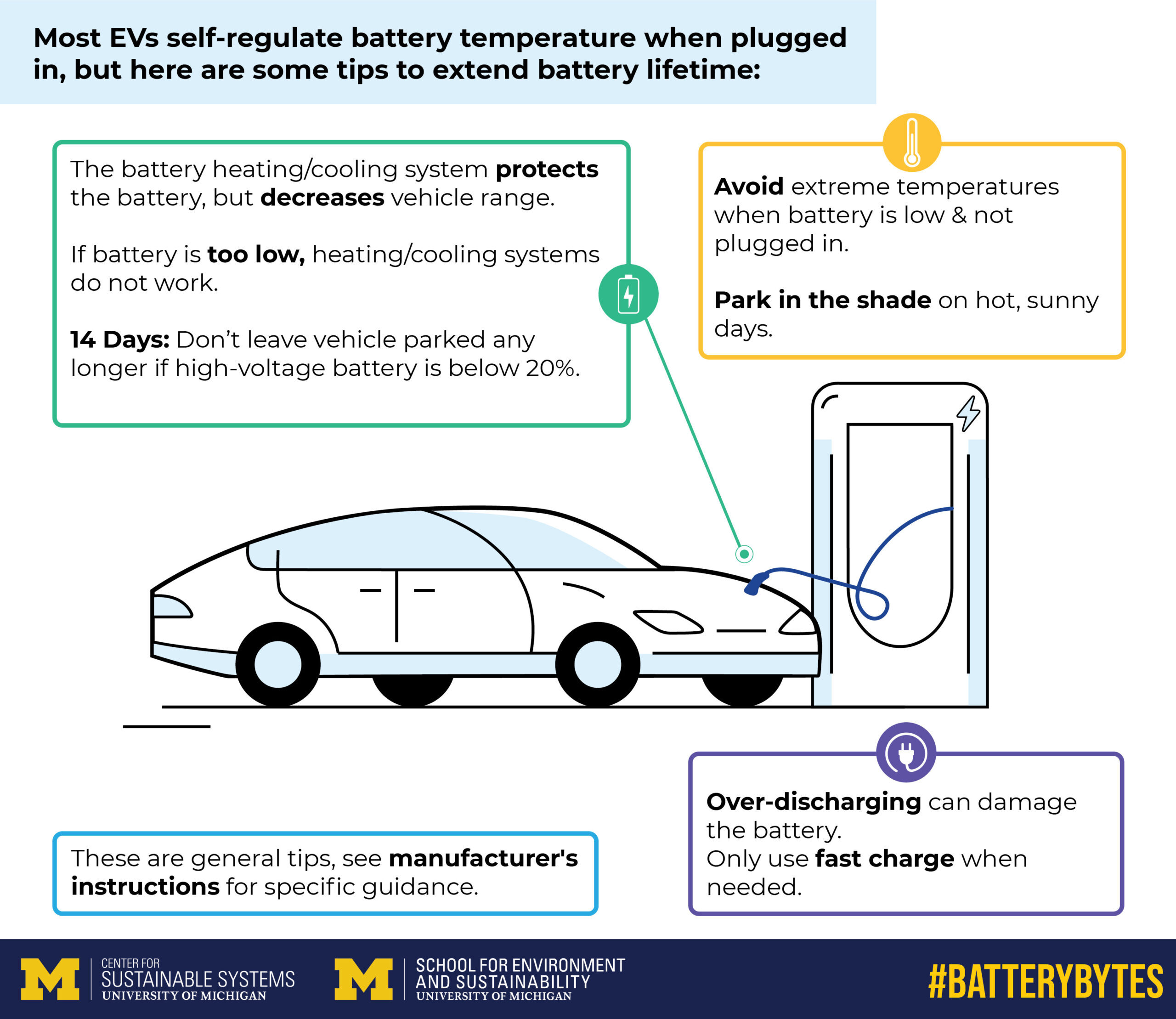 Many laptops have an internal battery management system that will cease charging once the device has reached 100% state of charge and it will not resume charging until the laptop has reached 95% SoC. Plus many laptop manufacturers caution against leaving the computer plugged in after it has completed charging.

Even though “fast chargers” are convenient, it will degrade a lithium-ion battery more quickly than standard charging. And discharging a battery too quickly also leads to battery degradation through many of the same mechanisms.

To slow down the discharge rate for cellphones and laptops, you can lower the screen brightness, turn off location services, and quit the high-power use applications. Some manufacturers of cordless power tools also advise users not to store batteries in the charger while others caution against running down the battery completely.

Battery cells consist of a positive electrode (cathode), a negative electrode (anode), and an electrolyte that reacts with each electrode. And lithium-ion batteries inevitably degrade with time and use. Nearly every component is affected, including the anode, cathode, electrolyte, separator and current collectors.

By extending the battery lifetime, there are decreases in costs and environmental burdens associated with the production of new batteries, including material consumption, mining impacts, and greenhouse gas emissions as well as the disposal of used batteries.

The Authors of the Journal of Energy Storage paper along with Keoleian include Maxwell Woody, Maryam Arbabzadeh, and Geoffrey Lewis of the U-M Center for Sustainable Systems and Anna Stefanopoulou of the U-M Energy Institute.

And the work was supported by the Responsible Battery Coalition, a coalition of companies, academics and organizations committed to the responsible management of the batteries of today and tomorrow.

“As the nation and world shift to economies powered by batteries, it is paramount that we extend the life of all types of batteries, particularly those in our cars and trucks,” explained Steve Christensen, executive director of the Responsible Battery Coalition. “This work by such a respected research institution as the University of Michigan is an important first step toward creating a generational change in how consumers use and treat batteries.”

Credit for the images: Center for Sustainable Systems at U-M School for Environment and Sustainability.