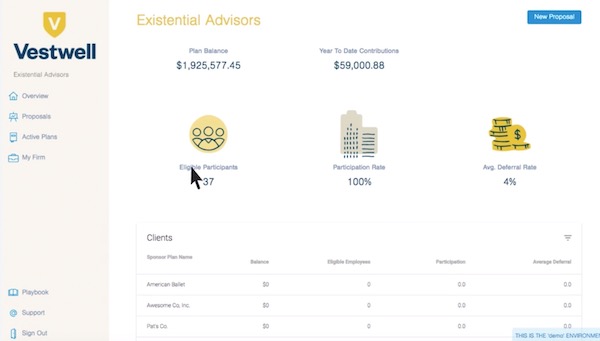 This round also included participation from Series A and Series Seed investors including F-Prime Capital, FinTech Collective, Primary Venture Partners, and Commerce Ventures.

“I feel Vestwell’s momentum on a daily basis, so it’s incredibly humbling to have so many of the industry’s leading players see the value in what we’re building and share our vision of what lies ahead,” said Vestwell founder and CEO Aaron Schumm. “We’re elated to align ourselves with retirement industry experts who are not only investing capital into Vestwell, but who are also investing time and resources into ensuring our success.”

Vestwell is considered the first digital retirement platform built for the financial advisor. And it helps scale plan sponsor and participant relationships to a new level. Through its streamlined administration, fiduciary oversight, and modern interface, Vestwell has improved on the 401(k) and 403(b) industry for the better.

“The market impact we’ve seen from Vestwell in the two short years since leading the seed investment in them is remarkable,” added FinTech Collective co-founder and managing partner Brooks Gibbins. “Participants, employers, and channel partners have all validated Vestwell’s approach, and we’re thrilled to continue supporting industry change alongside them.”

This funding round is expected to propel Vestwell even further and reset the bar for how open-architecture in retirement plans can be provided to companies of any size in an affordable and modern way. And this includes significant investments in technology and client service — which are two areas where Vestwell continues to innovate.

“We were drawn to Vestwell because it has developed a modern and intuitive interface that empowers advisors to more efficiently manage customized retirement plans,” explained Goldman Sachs’ CIMD co-heads Timothy J. O’Neill and Eric S. Lane.