Google has upgraded its Commutes feature on Google Maps to improve the ability to find charging stations for electric vehicles. And the listings include detailed information such as price, charging speeds, port availability, and whether it supports Tesla and ChargePoint. This feature is activated by searching for terms related to “EV charging” or “electric vehicle charging” on Google Maps. Plus it also shows photos, ratings, and reviews of the charging stations. 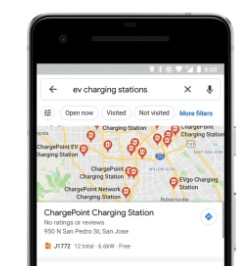 “We built Google Maps to help people get where they need to go no matter what mode of transportation they use,” said Google Maps Group Product Manager Andrew Foster. “Our newest feature brings helpful information about electric vehicle (EV) charging stations to the Map, so you can be confident that your car will be charged and ready for your ride, wherever you’re headed.”

Some of the country-specific partners included:

You can also use this feature on Google Maps for Android and iOS. And the desktop version is expected should be fully rolled out in the coming weeks.

Google added the new commute features on Google Maps earlier this month, which makes it easier to take control of daily commutes so that you can plan ahead and prepare for disruptions or avoid them together. The commute tab provides one-tap access for live traffic and transit information.

And the commute feature shows whether it is going to be a normal transit time or if you will need extra times due to heavy traffic. If there is a delay, then the commute tab will show alternative routes to get where you need to go faster.

For those who commute with a combination of driving and public transit, the commute feature shows helpful information about when to leave based on traffic details, train departure times, and walking times.