Earlier this week, Waymo — the company formerly known as the Google self-driving car project — has publicly rolled out its commercial ride-hailing service called Waymo One in the Phoenix, Arizona metro area. This metro area covers about 100 square miles of the Phoenix suburbs of Chandler, Mesa, Tempe, and Gilbert. Hundreds of pre-approved riders in these areas can book and pay for Waymo’s driverless taxi rides.

“Over time, we hope to make Waymo One available to even more members of the public as we add vehicles and drive in more places. Self-driving technology is new to many, so we’re proceeding carefully with the comfort and convenience of our riders in mind,” wrote Waymo CEO John Krafcik in a blog post on Medium.

For now, the rides will be monitored by trained safety drivers. And up to three adults and a child can travel at the same time. Following more rounds of testing, Waymo will make Waymo One available to the public. And an Android and an iOS version of the app will be released once that happens. 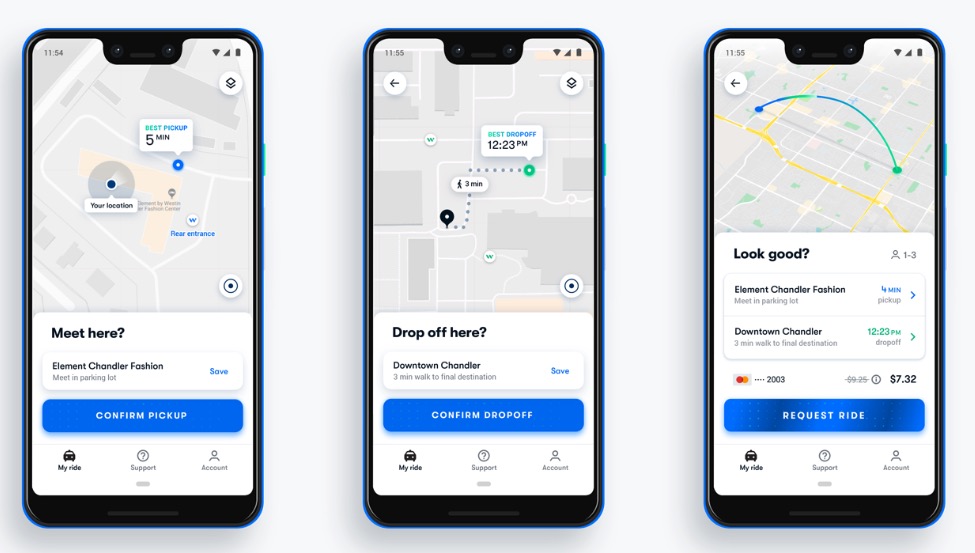 Waymo One’s driverless taxi service can decide the best route as it picks up and drops off passengers. And the passengers may have to walk for a few minutes to the pickup and drop off locations. As a user books the ride, Waymo will show a price quote.

How much does will it cost? The Verge reported that a ride from downtown Chandler to a coffee shop three miles away — which took eight minutes — cost more than $7. That breaks down to about $2.33 per mile and is about the same as what it would cost if you were using Uber or Lyft. But this rate would likely fluctuate depending on the time, the traffic, the city, and other factors.

Here is a demo video that Waymo released for Waymo One:

Waymo’s vehicles traveled 10 million miles autonomously on public roads and 7 billion miles in virtual simulations. Public trials over this service started in Phoenix last year. The Arizona transportation department approved of Waymo’s commercial ride-hailing service in the state back in January. And Waymo also received the first permit in California to test driverless vehicles on public roads a couple of months ago.

Over the next few years, Waymo is planning to buy 62,000 plug-in hybrid Chrysler Pacifica minivans and 20,000 all-electric Jaguar I-Pace SUVs.

The driverless taxi industry was set back after Uber was involved in an accident where one of its vehicles hit and killed a woman in Tempe, Arizona several months ago. Following that incident, Uber stopped testing its self-driving vehicles temporarily.

Uber is now preparing to resume autonomous testing in Pittsburgh again soon. And there are limitations being put in place such as more testers being included in every vehicle and speed caps. And it is believed that Uber’s self-driving vehicles will not be tested at night or in wet weather, according to The New York Times.

Waymo’s self-driving vehicles were also involved in accidents. This past summer, a driver fell asleep on a highway in California and accidentally disabled the car’s self-driving software — which caused the vehicle to crash into a median. And another Waymo test driver swerved to avoid a car in California and hit a motorcyclist. To prevent similar accidents from occurring in the future, Waymo is going to install cameras in vehicles to monitor the fatigue of the drivers.